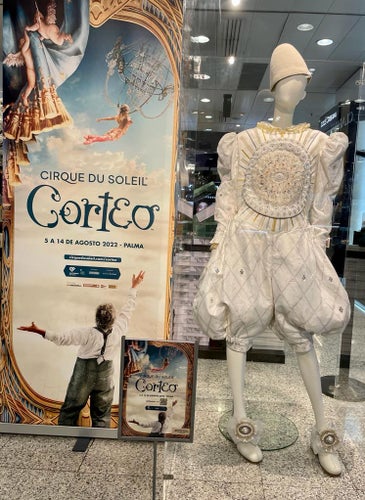 CORTEO, which means cortege in Italian, is the most enchanting of Cirque du Soleil's productions. It will be presented in Palma, Mallorca, from the 5th to the 14th of August at the Velòdrom Illes Balears (Old Palma Arena).

This unique show, directed by Daniele Finzi Pasca, is a joyful procession, a theatrical world of fun, comedy and spontaneity set in a mysterious space between heaven and earth imagined by a clown.

The clown Mauro imagines his own funeral, which takes place in a carnival atmosphere.

Memories play with the senses. The sound of laughter peals around the stage, the joyous tumblers and players fascinate the eyes.

Regret and melancholy retreat in the face of a cavalcade of lively memories of a life gloriously lived.

A festive parade that entertains; the perfect accolade for an artist whose life was dedicated to revelry and making merry.

One of the things that makes CORTEO a wonderful show are the costumes of the characters: each artist in the show has a look made specifically for him/her.

This is an exclusive costume designed by Dominique Lemieux for the figure of the White Clown of CORTEO, a magical and timeless character in the circus tradition. It is made to measure, with every element of beading and every pleating around the waist worked out by hand. It took 72 hours of cutting and sewing for the costume, 24 hours for the dungarees.

A rigorous work that requires time and patience for a result as spectacular as everything that is part of Corteo.

The show, which lasts two hours and has 5 acts, brings together the passion of the actor with the grace and power of the acrobat to plunge the audience into a theatrical world of fun, comedy and spontaneity.